Box of Lies by Mark LaFlamme

This box is for you. It's all yours, to do with as you wish. Keep it closed and it stays dark in there, entire worlds trapped in endless night. Keep it closed and its inhabitants are unable to excite you, thrill you, touch you. Maybe it's better that way. It's difficult to judge what is safe and what is a rotted beam ready to give way beneath your foot. Yes. Better to keep the box closed and spare yourself.

One peek might be okay. Just a fast glimpse to see what stirs at the corners of the eyes.
There. Men and women forced to march for their daily bread.
And there. A friendly fisherman who won't stay buried.
Oh, and there. The children are insane. The elderly play games of chance with wicked prizes, and a man is in love with a machine.
A crazy lady frets over pennies on the sidewalk. Cannibals dine together over pitchers of beer. The end of the world doesn't guarantee you a trip out and you could find yourself journeying to the afterlife and back.
This box is unlike any other you have ever held in your hands. It demands restraint. The longer you look, the more you wonder. Who killed JFK? What are they hiding at Area 51? What really happened on 9/11 and where do we go when we die?

It's your box, the choice is yours. Put it down and walk away. Or open it up and explore a world of treachery and terror, greed and gloom, love and lies. From the mind of Mark LaFlamme, this is a box filled with things from which most will hide.

And it's all yours.

Mark LaFlamme is a crime reporter and columnist at the Sun Journal. He is the author of the novels "The Pink Room," "Vegetation," "Asterisk: REd Sox 2089" and "Dirt: An American Campaign," as well as the short story collection "Box of Lies.

This review is really, really late in coming, because I wanted to do it up right, and I didn’t want to skimp on it. Chances are you wouldn’t have known if I hadn’t told you, because chances are you haven’t heard of the book, Box of Lies, even though it’s been out a full year as I write this. You may not have even heard of the author, Mark LaFlamme, unless you live in the Lewiston-Auburn area. Why this is, I can’t explain. LaFlamme has been steadily writing and releasing excellent horror and weird fiction books since 2005, and each one has had a slightly different but equally captivating overall character. I’ve liked and admired every single one of his books I’ve read, and that’s most of them. Why one of the big publishers hasn’t picked up his contract is beyond me.

LaFlamme was born in Waterville, Maine, and continues to live here with the rest of us loonies. Clearly this has affected his brain, and has fertilized his imagination to an ungodly level. As if that wasn’t enough, for the last 17 years or so he has been writing the Lewiston Daily Sun’s crime beat, and has been the author of their “Street Talk” column for many years. The influence of this journalistic work on his fiction is a straightforward approach that takes the reader on roads that would never have been taken otherwise (one hopes).

I know in the past I’ve compared some of his storytelling skills to Stephen King’s, but truly his voice is his very own, and a strong one at that. Unmistakable and somehow honest even though what he tells us word by word is a string of lies. That, I suspect, is because he knows the truth, intimately. Working the crime beat in Lewiston, Maine, is a hard way to learn about reality, yet that is what he does, every day, every late night shift. Yet somehow within him a spark of light still lives – though perhaps that light simply serves to throw darker shadows as he speaks in these stories.

Page by page in Box of Lies, LaFlamme giveth and he taketh away. Is what we imagine real? Is that which we think real imagined instead? In "Table for One," LaFlamme turns the fancies of the paranoid mind of the restaurant diner into solid worse-than-you-could-imagine reality. In "Pepper," a visiting alien finds out what makes Earthmen tick. In "The Bender Argument," LaFlamme gives us a scenario that posits what you might get if you like philosophy a little TOO much, a story which would make one hell of a nightmare movie, a perfect Twilight Zone episode, and would make Philip K. Dick himself proud.

Those of us who spend time musing about the unknown histories of our local street people may notice that LaFlamme has the talent to transmute these blanks into new stories, such as Elsy in "Find a Penny," wherein we find out what happens when you can’t tell a bad penny from a good one until its spell is woven in intractable time. Others of us who wonder what happens in communities after the press is done reporting on the latest icy winter sport fatalities will find out perhaps more than we wanted to know in "Bone Lake," where the search goes on for the dead that have left land for the cold dark waters.

The 28 stories in Box of Lies vary in size from 5 pages to 31 pages in length, which gives a wonderfully varied pace to the collection, and subject matter ranges from the graphically horrific to the futuristically normal, which reminds me of some of my favorite horror/weird fiction authors’ collections, like Ray Bradbury and Stephen King. But when I asked him if he prefers writing scifi or horror, LaFlamme answered, “I'm constantly telling people that I don't write either. I don't set out to write horror or science fiction. It's just that my characters tend to do things that are: A) horrifying, or B) in defiance of known physical laws. I like to think of myself as a perfectly normal writer whose characters misbehave. I even tried to write a romance once. The heroine ended up dead, hacked into a dozen pieces and shipped to Venus. Not really. But that sounds pretty good. I might write that one.” 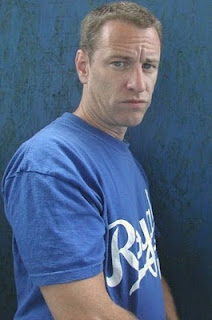 As a Mainer, his stories are often set here in the Pine Tree State, but as he succinctly explains, “The slithering freak plants in Vegetation are no more creepy because they are set in Homefield, Maine. I could have set that book in Dork, Utah and the substance of the tale wouldn't have changed a bit.” Yet somehow his home state creeps its way into the tales, for whatever reason. It may have something to do with the long winters, which form the impetus for him to create: “I absolutely hate winter. It's cold. It's dark and it seems endless. I can't ride my motorcycle much and there's no point in going to the beach at all. Maine winters are harsh and long. With all that time spent indoors, it's easy to become introspective and gloomy. Which I do. If I didn't have fictional worlds to turn to, I'd probably go into my basement and never come out.” (Maybe that’s another story for you to write, Mark!)

Like me, he has pondered why Maine does seem to stand out from other settings. “There IS something about Maine. It's rugged. It feels isolated from the rest of the world. The people here have their own way of doing things. I think that gets overplayed in Hollywood sometimes, but there's no doubt that living here is conducive to creativity. And perhaps lunacy.”

Some folks who read LaFlamme’s work in the Lewiston Sun Journal develop the idea that he’s from away, but that may be due to the fact that he, like many Mainers, has felt the need to roam. “I spent some time in the south - Charlotte, NC and Newport News, Virginia, specifically - but didn't last long down there. Like so many others, I came back. It was almost a subconscious decision, some homing mechanism I don't fully understand. Someday, I'd like to move out to California or Arizona. Could I stay out there? Remains to be seen. In the meantime, I'm here in Maine, my roots getting thicker by the hour.”